The TIDDLER FUND at St Uny

During the August 2019 Café Church at St Uny I found myself pondering on the history of the “Tiddler Collection” (a regular feature of Café Church at St Uny, Lelant – first Sunday each month – Ed.). Probably because I was remembering one of its founders, Beverly Wills.

In 1983 we needed £3,000 to repair one of the bells. Appeals went out for donations and loans. Within three months the funds were in and repairs could begin.

At the same time Ethiopia had a terrible famine and every night the television showed heart-breaking footage of starving and dying children.

Beverly wrote: “The young people in our Sunday School were horrified and moved. They were also highly indignant that we should be spending so much money on a bell when children were suffering. We had a long discussion about this and also what they should do. It was decided that each month at the Family Service we would bring our jam-jars with all the odd ‘tiddlers’, (half-pennies to the very young), and empty them into a tin. The tin was important because the more noise it made, the more money we had collected! Save the Children was chosen as it gave more of each pound raised to the child than any other charity and I believe this is still true.

“Sarah Jewell, then a committee member of Save the Children, came to talk to us …..and so the Tiddler Fund was born. The first month we hoped for £2 or £3 pounds. Instead we got £41.88!

“The Tiddler Fund is now over 35 years old and all those young people have ‘growd up’ and many have children of their own but it’s thanks to Sarah, Tim, George, Daniel, Nikki, Velisa, Mark, Matthew, Joff, Clare, Izzie and all the other young people that it is still supporting the work of the Save the Children.

“A friend of mine knowing how indignant I was at the spending of money on a bell said, ‘But we all need bells, Bev’. Well that bell, or its repair certainly rang for us and maybe the noise of those coins cascading into an old tin was like the chime of a bell for our Lord as it meant children caring for children. We now use a basket which is far less intrusive!

“Since the start of the fund we have far exceeded the £3000 but I hope that as long as there are children who are suffering the Tiddler fund will continue.” 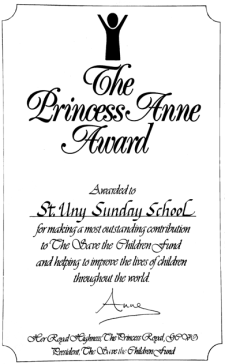 In 1989 we were very thrilled to be presented with the Princess Anne award because of the Tiddler Fund at a special fun day at Saltram House. Alison Sanders collected the award accompanied by Sandy Dee-Shapland and Emily Wills.

If anyone would like to join in – all you need is a jam-jar! Empty in to it all your odd coins and bring it along to Café Church. You will be very, very welcome and you can enjoy a coffee and croissant!